Generating a Story For Your Tabletop Game

Being a DM (Dungeon Master, or Narrator, or Storyteller, or Game Master) is a lot like being a doctor – you’re always “practicing.” I don’t claim to be an expert DM, because I think you never really stop learning. Running a tabletop game has an infinite ceiling of quality – you could always put in more time, more effort, more props, more music, more clever scenarios and world building.

There is no “perfect” DM because there is no perfect game. It’s one of the more maddening aspects of running a live RPG game for your friends – you will never be prepared enough. You’ll never know enough. You’ll never have exactly the perfect pacing. You can’t, for obvious reasons – a live tabletop game is inherently unpredictable, and it becomes less predictable at an exponential rate.

The players can go left when you think they’ll go right, they’ll walk up and try to negotiate with the mummy you’d thought they’d kill with fire on sight. They’ll love the villains you’d thought they’d hate, they’ll despise the cool NPCs you knew for sure they’d ally with. A scene you thought would take an hour takes 2 minutes, and a “funny barfight” you threw in the middle of the adventure to mix it up becomes a killing spree with the entire town-watch chasing the heroes through the streets.

Life and work have put me out of the DM game for awhile, but I’ve decided recently to jump back into the waters. And as I prepare for the worst, I thought I’d share some tips I’ve collected over many years of mastering dungeons. Today, let’s talk about story.

Coming Up With the Story

Telling a story in a tabletop game is one of the trickier bits, and many people never quite get a handle on it. You have to remember that you aren’t penning a novel, or a screenplay. In fact, if you’re deadset on telling exactly a specific story, you’re better off just writing a book and sparing yourself the heartbreak.

You don’t have to craft the most original story in the world to make it completely memorable and fun. Remember, your players are just as responsible for the storyline as your are – they make the decisions, they write all the main character dialogue. Their very presence ensures a unique story – no other book, movie, or tabletop game on the planet is going to have the exact same combo of people from the exact same backgrounds with the exact same preferences. The story is going to end up unique whether you want it to or not.

Because of this inherent uniqueness, don’t be afraid to make your job a little easier – in short, steal. Hijack every story idea you can. Do you like the movie “Tombstone?” Of course you do. Start the game with the PCs traveling through a town where the Sheriff is killed, and there’s no one around to take the job. They’ll naturally step up. Throw in some minor crimes to solve or domestic squabbles to break up (your PCs will enjoy the power). Then, escalate to a gang (like the cowboys in Tombstone) calling them out in their own personal OK Corral. After an epic fight, while the PCs are cooling off, have the gang assassinate a beloved NPC. The PCs will want vengeance. They’ll chase the gang through the countryside. Bing bang boom. You’ve got a fun adventure that’ll end up unique because the PCs are going to throw you curve balls.

For instance, there’s no Doc Holliday PC. The story will already feel hugely different. They may not take the Sheriff position. Or, during the “OK Corral” fight, maybe one of the PCs is killed, and the rest of the party might spring into vengeance mode early. Or perhaps the PCs will refuse to fight the gang members, and the gang will attack them at their hotel while they’re sleeping. Or, being even more clever, the PCs will agree to the fight at a certain time (high noon, let’s say) – however, the PCs track down the gang members and arrest them one at a time before 9am even rolls around.

I once based one of my most successful adventures on the film “3:10 to Yuma.” Hell I wrote “3:10 to Evanston” at the top of my notes for the adventure to remember my inspiration.

The PCs were all part of an army unit (so the story already feels different). Then I had them receive orders to escort a high-profile enemy officer that their side had captured in the previous battle. The mission was simple – no harm could come to the prisoner during his trip, because he was full of juicy intel. Their orders even specified that they were to give their lives if it would save this enemy prisoner. So, like 3:10 to Yuma, the main characters are forced to safeguard a hostile, intelligent, creative bad guy who wants to kill all of them, and (more importantly) knows they can’t harm a hair on his head. This character (a dwarf named Colonel Ramses) proved to be one of the most frustrating villains the PCs ever encountered.

Ramses was constantly betraying them, trying to get them killed, running off, escaping, making loud noises when they were sneaking, the whole bit. And they couldn’t touch him! Again, I’m not bragging about how brilliant I am, but rather explaining that it’s so much easier to take a good idea and tweak it then trying to come up with something all on your own.

A DM’s job is difficult enough – you have to be a one-man rules engine, storyteller, juggler, strategist, actor, soundtrack, and more. To quote Pirates:

Keep in mind I’m not suggesting stealing story ideas for any other purpose – D&D (or Vampire, Dresden Files, Deadlands, Star Wars, etc) is a performance art that is not recorded, sold, or broadcast. You can steal whatever you want and not have to stress about it. Though, to be fair, even if they made a feature film about a fantasy military unit escorting a dwarf through goblin territory, it still wouldn’t get sued by whoever owns “3:10 to Yuma.”

For the record – the PCs did manage to get Ramses to his destination. I mean, he was missing a tongue and his eyes because of a very persistent and brutal female vampire assassin, but that’s the clerics’ problem to fix. No biggie.

Also, and you may have noticed this from my examples: western plots make for great RPG fodder, no matter the genre you’re playing in. The stories aren’t terribly complicated, they’re usually high drama and action, and they’re often “designed” for groups. Plus the transient nature of most western protagonists makes  it easy to drop the players into a situation and then, subsequently, usher them back into the sunset again.

If you’re still not sure if western stories work for all genres, check out Star Trek, Star Wars, Firefly, The Dark Tower, Supernatural, etc, you get the point. 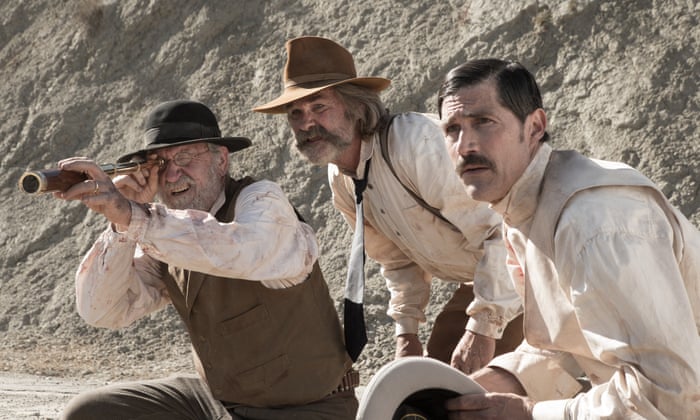