Even though 2017 isn’t quite over yet, my con year has come to completion as I attended my Stan Lee’s LA Comic Con, formerly known as Comikaze Expo. Taking place from Oct. 27 – 29, LA Comic Con was a far more satisfying experience than Long Beach Comic Con in September, but still pales in size and scope to Anime Expo or San Diego Comic-Con. Still LACC had a stellar lineup of guests with names like Paul Reubens, Scott Bakula, Kevin Smith, Chloe Bennett, Drew Carey, and Katee Sackhoff. Without a doubt, the LA Comic Con’s biggest get was Dwayne “The Rock” Johnson, who took time out of his exceedingly busy schedule on Saturday to promote Jumanji: Welcome to the Jungle.

What sets LA Comic Con apart from similar conventions is a main stage for panels in the exhibit hall so there’s no need to camp out for their most popular programming. The Rock certainly drew one of the largest crowds I’d ever witnessed at LACC. He didn’t reveal any new information on his upcoming blockbuster, but did introduce a behind-the-scenes featurette and expressed great joy at in paying homage to the legacy of Robin Williams. The panel went off the rails when Rock attempted to take questions from the fans. Rather than discuss Jumanji, they mainly asked for selfies and one woman requested Rock to autograph her arm so she could have it tattooed.

Saturday appeared to be the most crowded day for LA Comic Con with a far smaller amount of attendees on Friday when they were only open late afternoon and into the early evening. Unlike previous years, the convention was confined to the South Hall with a fitness expo occupying the West Hall (opposite Staples Center), In spite of the

Friday was a good time to get acquainted with the layout of the exhibit hall and maybe grab some of the exclusive Funko Pops at the Hot Topic booth. At its busiest point, the line for the cute little bobbleheads stretched halfway down the exhibit hall. The only event on the main stage for Friday was the Le Geek So Chic fashion show featuring geek inspired outfits from several designers. Perhaps, the most unique were the futuristic, cyberpunk clothes by Latvian designer Zolnar.

Saturday was certainly filled up nicely by attendees. In addition to the Rock, programs for Saturday included the cosplay national championships, a reunion for the casts of Powerpuff Girls and Sabrina the Teenage Witch, and a tribute to Adam West. The Black Eyed Peas was the penultimate panel for the main stage right before Rock. The hip hop artists were joined by Flavor Flav, Redman, and Rosario Dawson to promote their graphic novel, Masters of the Sun, published by Marvel. will.i.am proudly showed off an augmented reality app that combined motion comics with Pokemon Go. The app allows users to read the comic with additional effects, voiceovers by an all-star cast (Queen Latifah, Common, Jamie Foxx, among others), and collect characters.

This year’s LA Comic Con didn’t fall directly on Halloween, but that didn’t stop organizers and vendors from distributing candy on Sunday and making it a kid-friendly affair. Sunday was also a great day to grab some autographs. I was able to get some comics signed by Greg Capullo and Mark Bagley, famed for his iconic runs on Amazing Spider-Man and Ultimate Spider-Man. I’m not just a comic book fan, I’m also a huge fan of professional wrestling. There may be creative doldrums at WWE, but New Japan has been tearing it up for the last couple years. I was lucky enough to attend their Long Beach shows back in July and got my program signed by Bad Luck Fale, The Young Bucks, and the Guerillas of Destiny. All of them are members of the red hot stable, the Bullet Club, whose T-shirts are now available at Hot Topic stores and have become regular fixtures at comic conventions and wrestling shows. The Bucks took part in a panel to discuss indie wrestling and got into a brawl with rivals Christopher Daniels and Frankie Kazarian.

It wasn’t all fun, games, and superkicks at LA Comic Con. Staging an event such as this in Downtown LA always has its drawbacks with traffic and parking being regular problems. You also have the Lakers and Clippers playing at Staples Center, along with a marathon on Sunday morning that shut down several nearby streets, to exacerbate the situation. Much like other conventions, LACC also instituted new security guidelines that prohibited the use of prop guns, lightsabers with heavy metal handles, and other types of costume props. The weapons check area was strewn with all manner of weapons that had to be checked before entering the exhibit hall. Dozens of Harley Quinns and Negans had to leave their trademark baseball bats behind and mighty Mjolnir was found unworthy. Still, the cosplay didn’t suffer.

With Halloween so close, cinema’s most infamous killers were popular costumes with men and women dressed up as Michael Myers, Freddy Krueger, Jason Vorhees, Chucky, and Billy the Puppet from Jigsaw. Thanks to a It being a rousing success, there were Pennywise a-plenty at LACC, along with a few Georgies and a Beverly. We also had a few Helas and Valkyrie in anticipation of Thor: Ragnarok.

To wrap things up, I’d rank LA Comic Con and Wondercon as my two favorite conventions of the year though my best photographs were taken at Long Beach Comic Con. 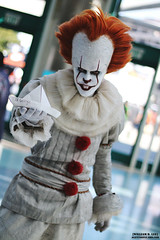 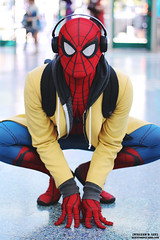 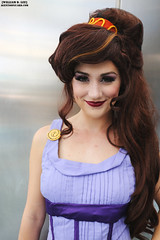 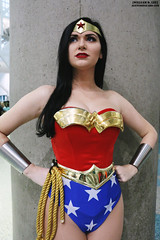 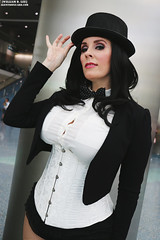 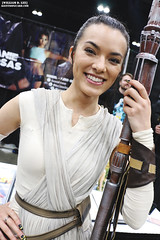 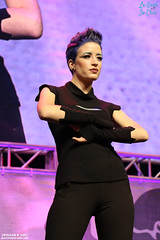 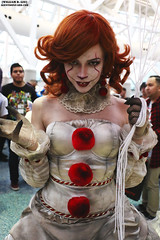 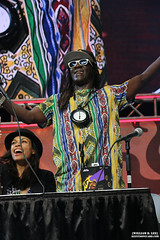 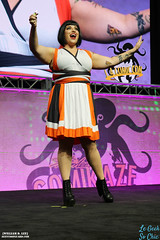 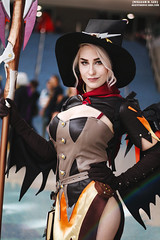 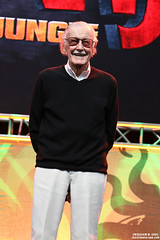 For more photos, you can check out my Flickr album.