Dreamcasting: Knights of the Old Republic

There are some pretty heavy rumors swirling about that LucasFilm may be adapting fan-favorite and best Star Wars game ever Knights of the Old Republic into a movie or series of movies.

And while you’d think I’d have learned my lesson from my completely wrong The Force Awakens casting where they completely threw out every old beloved character and replaced them with . . . other . . . characters, I’m not so sure they’ll be doing that this time.

After all, The Force Awakens was just a new movie. They never claimed they were bringing back any of the old EU (in fact, they said the opposite). But if you’re specifically making an existing story (like KOTOR), then I think it’s safe to assume at least some of the characters will appear onscreen.

The best part about casting the main character of Knights of the Old Republic is that you can do whatever the hell you want! The main character was completely customizable, not only in appearance but in dialogue and story choices.

So, not only will the writers get to play with their personality and create their own character to stand front and center, but the appearance is completely fan backlash-proof.

The Main Character is canonically male, and there’s plenty of great female characters in the cast, so I’m just going to assume he’ll be male. But, again, they really could do whatever they wanted.

Here are a couple of casting options, because, well, I had to put something here.

Why? Because I love Steven Yeun. He showed a huge amount of range on the Walking Dead, from naive and boyish to love-struck to hilarious to heartbroken to ass-kicking asskicker.

He’s also brilliant in the film Mayhem, which shows us a darker side to the actor and a bit of whimsy, too. Whichever way they go with the Main Character (choosing light or dark was always up to the player), I’m comfortable knowing Yeun can handle the action, the light side, and the dark side with vulnerability and some steel in his spine.

I need Sebastian Stan in a Star Wars movie. I’d prefer if he played a young Luke Skywalker or even a son or grandson of Luke Skywalker, but I’m perfectly happy as him being the Main Character of a new trilogy as well.

Sadly, Bucky’s been sidelined pretty hard in the MCU – I think he’s had a total of two lines in the last two Avengers movies and is seen mostly firing an assault rifle into a crowd of bad guys who aren’t terribly phased by an assault rifle. He’s had the same combat superpowers that I or anyone with thumbs and a trigger finger has.

I’d love to see Sebastian lead a franchise, and he has the soulful eyes and matinee idol good looks to pull off KOTOR with ease. 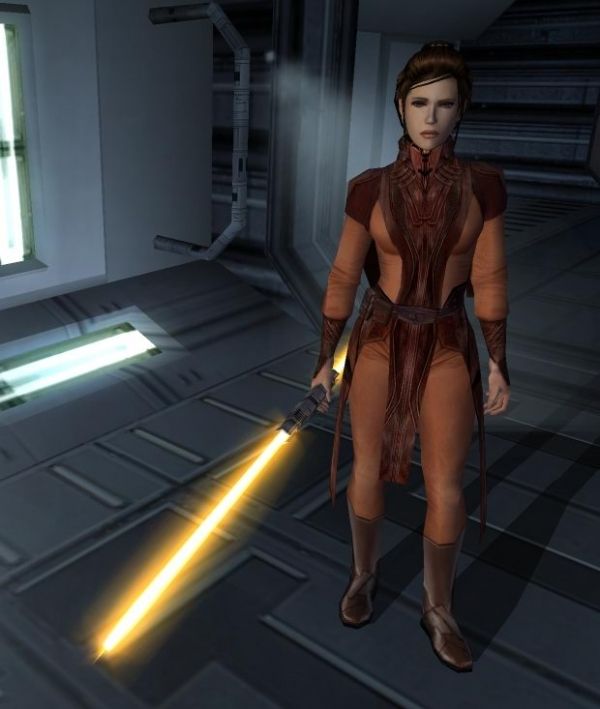 Bastila Shan is a straight-laced Jedi Knight, a military leader renowned for her special talent for “battle meditation.” Battle meditation is the ability to extend one’s mind through the Force and into a large group of people, essentially “networking” them together so that they fight and communicate more efficiently. In old canon, the other well-known master of this art was none other than Emperor Sheev Palpatine himself.

She is eventually faced with some of her more extreme choices, and has to reconsider her viewpoint on forgiveness, revenge, and redemption. She’s a fantastic character, and there’s a good reason she’s front-and-center on the box art. If the Main Character is the main character (which, I mean, yeah), then Bastila Shan is definitely a deuteragonist or secondary main character with just as much relevance to the story.

In some versions of the story she’s a romantic interest for the main character, but, again, that was up to the player. Also she wields a yellow lightsaber, which is my favorite color lightsaber and also objectively the best color don’t @ me. While I’ve only seen her in the Evil Dead reboot and Castle Rock, she’s had an instant spark in both that made her easily the most compelling actor onscreen in both properties.

In Evil Dead she played Mia, and without getting too spoilery for a six-year-old movie, she shows a great deal of depth due to some . . . demonic developments in the story. In Castle Rock she plays the niece of Jack Torrance from The Shining, and brings a kind of fucked-up, vulnerable-but-awesome pathos that magnifies her limited screen time into one of the highlights of the show.

She’s absolutely ready to lead a major franchise, and she has the range to follow Bastila’s story wherever the writers choose to take it.

Carth Onasi is a little bit Han Solo, a little bit Indiana Jones, and a little bit Woobie fuck-up. He means well, he’s got a smart mouth, and he flies the Ebon Hawk, the “Millennium Falcon” of the Old Republic days. 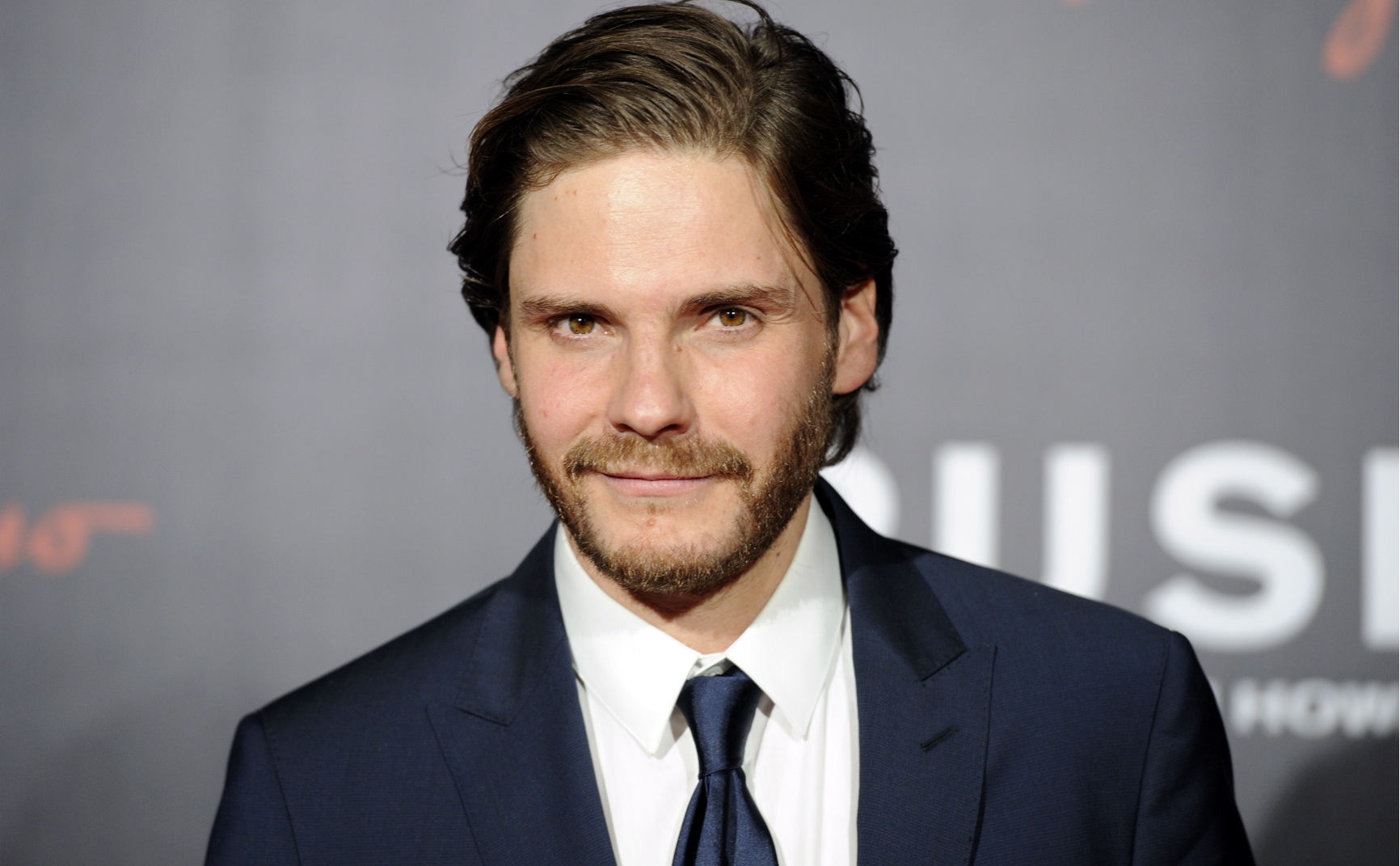 However, he has plenty of charm and a devil-may-care glint in his eyes when one of his usually-villainous characters is pretending to be dashing. Also, he has that hollow, sorrowful look that fits the more melancholy side of Carth.

Plus, it’s fun to see often-pidgeonholed actors flex a little. 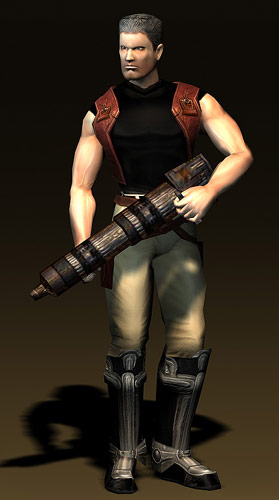 Juhani is an optional party member in the game, and you only collect her if you say the right words and dance the right dance. 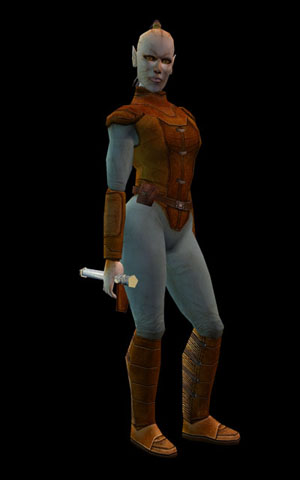 She’s also known as the “cat lady Jedi,” and has had a rough go of it. Slavery, Jedi training, murder, exile – life has dealt her a raw Sabacc hand, but the Main Character can try to help her (or leave her by the wayside). 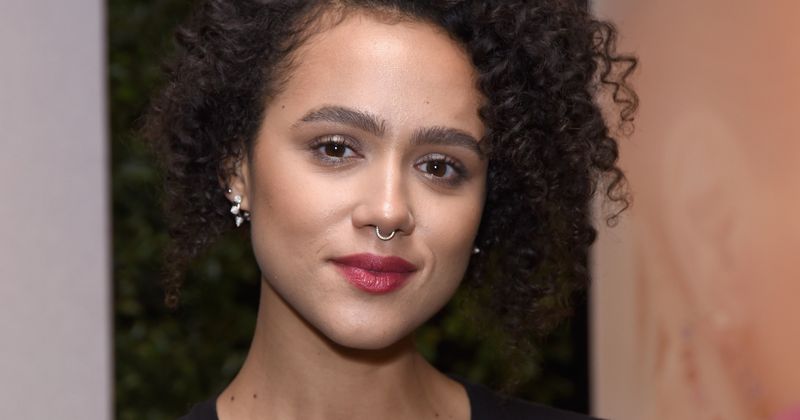 Better known as Missandei or “Miss Sunday” on the now-concluded, indie show you’ve never heard of Game of Thrones, Nathalie Emmanuel has the quiet-but-intense presence needed for the shy, awkward, but exceedingly dangerous Cathari Jedi struggling with her own past failings with the Dark Side.

Jolee Bindo is a self-proclaimed “Gray Jedi,” a Jedi Master who made the decision to disconnect from the politics of the Jedi Order and go his own way. He’s wise but with a trickster’s sensibilities, and he isn’t afraid to kick tradition in the kavasas when need be.

Chiwetel is A) just a fantastic actor and B) beloved to sci-fi fans because of his turn as “the Operative” in the Firefly follow-up movie Serenity.

He also shows a real facility with a playful smirk, and can bring the gravitas when its time to drop knowledge.

HK-47 is an assassin droid (called a hunter-killer) with a particular dislike for biologicals, who he calls “meatbags.”

He’s horribly insubordinate, an avowed psychopath, and easily the most hilarious member of the party. In a way, he’s the anti-C3PO.

The SNL alum and ever-present comedy staple Bill Hader already has a role in the new Star Wars movies: he’s been credited as providing some of the voice for BB-8, and working as a kind of sound consultant for the bouncy little droid.

However, Bill’s intensity and facility with voices make him an ideal candidate for HK-47, and it serves to reward the man with a meatier part. 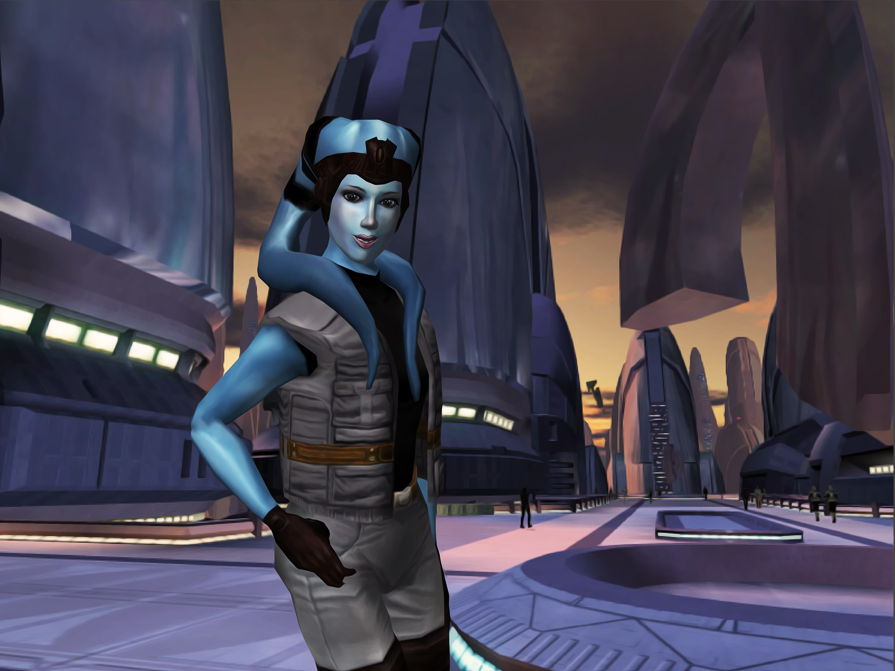 Mission Vao is a young Twi’lek street rat, a “slicer” who survives off her repair skills and hacking. At some point she helps out an outcast Wookie named Zaalbar, or “Big Z,” and the two become inseparable.

Mission provides a nice youthful, plucky contrast to some of the more gruff and stoic members of the team. While she doesn’t play a huge role in the story, she balances things out nicely. 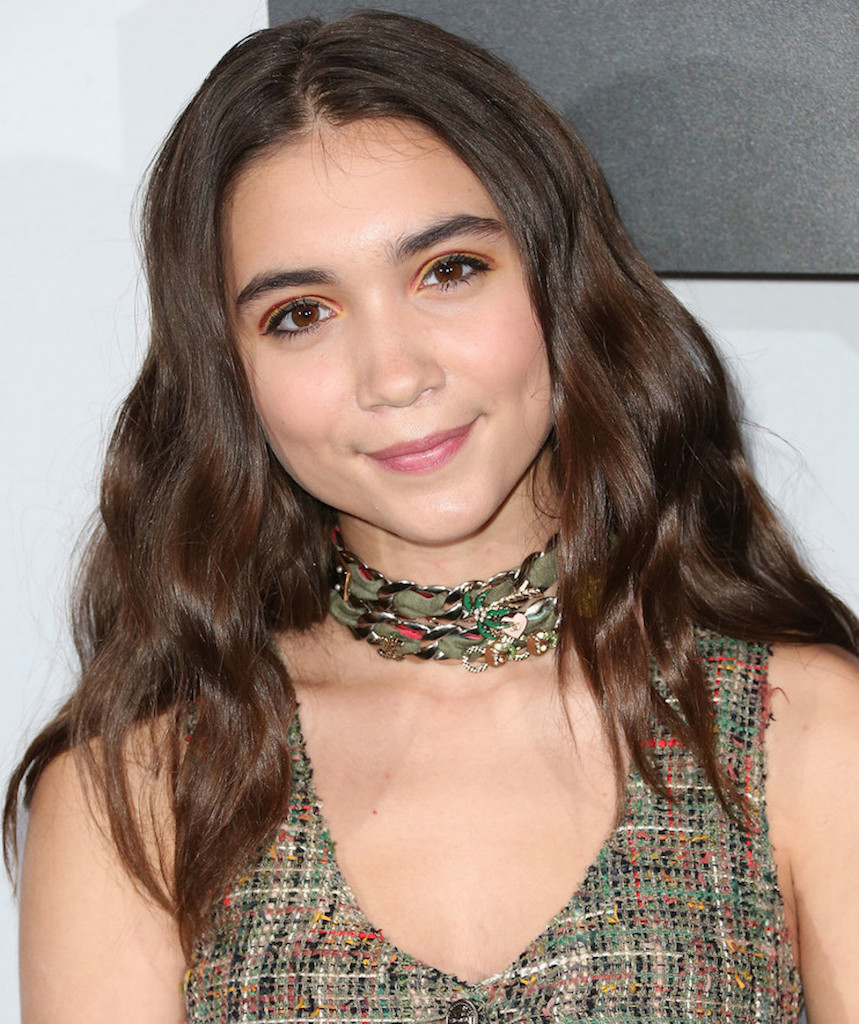 Also known as Corey and Topanga’s daughter in Girl Meets World, she also did a successful stint as Adam’s tomboy friend on The Goldbergs.

She’s funny, brash, and is already on Disney’s payroll. It’s a win-win. 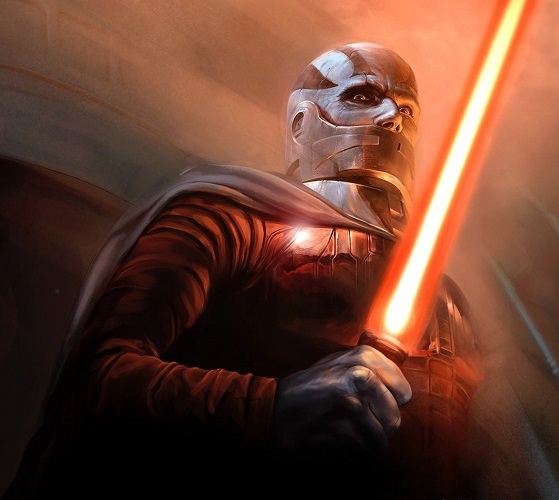 The big bad of the story (who kinda looks like Baron Underbite from Venture Brothers), Darth Malek has a pair of motivations for his nefarious ways.

He wants revenge against the Jedi for taking down Darth Revan, his sinister master, during the Jedi Civil War. He also wants to create a new Sith Empire to defeat the Old Republic and is doing anything he can to acquire ships, resources, and troops to do it. I would LOVE to see Henry Cavill really dig into a villainous role like this. While the Superman movies he’s been forced into haven’t been great, he himself has a dynamite presence and a glare that could stop a tank.

Darth Malek is also built like a brick shithouse and has a head like an iron lantern, which comes free with purchase if you nab Cavill. 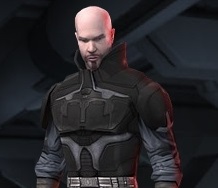 Darth Bandon was a former Jedi Knight who switched sides to the Sith after the Jedi Civil War.

He’s the main villain’s lacky, and he’s another bald, white guy. So, for the sake of mixing this shit up, I’m changing Darth Bandon to a woman. We need more women villains in Star Wars, because Sith chicks are hot. Also because why not do something different, eh? Also Sith chicks are hot.

That’s right. Why? Because Gina Torres is tall, imposing, gorgeous, frightening, and painfully badass. You see Gina Torres walk through some doors in black leather and high boots, igniting a ruby red lightsaber as her eyes go yellow, and you find yourself face-to-face with the wrath of a dark goddess.

While there are plenty of other side characters in the story (the game was made by Bioware), I ain’t got time for that shit.

Got any suggestions for characters I didn’t mention, arguments about the actors I chose, or just general disagreement and vitriol? Comment below, or share on twitter or facebook and let us know how wrong I am.